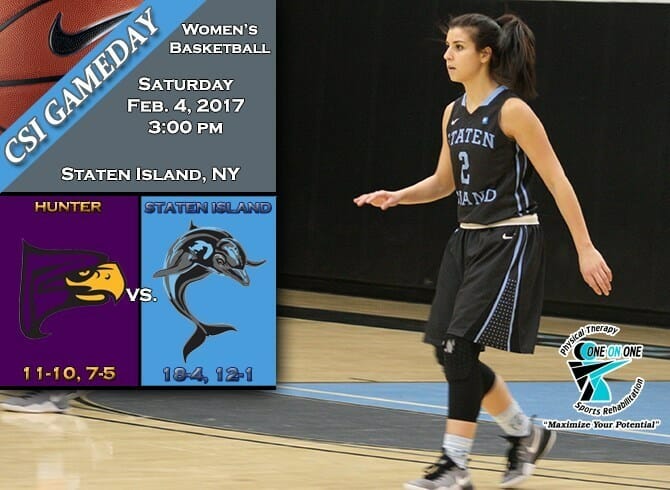 The College of Staten Island women’s basketball team will ride a 10-game win streak into this afternoon’s doubleheader against Hunter College.  The Dolphins will want to continue winning to hold their spot atop the CUNYAC standings with three games remaining.

CSI vs HUNTER COLLEGE AT-A-GLANCE
Matchup: CSI (18-4 overall, 12-1 CUNYAC) vs. Hunter College (11-10 Overall, 7-5 CUNYAC)
Where: CSI Sports & Recreation Center – 2800 Victory Blvd. – Staten Island, NY
Tip-off: 3:00 pm
Live Stats: http://www.sidearmstats.com/csi/wbball/
Live Video:  http://www.csidolphins.com/csisportsnet
All-Time Series: Hunter leads 37-32
Last Meeting: January 11, 2017 – CSI won 75-53
Players To Watch (CSI): Christina Pasaturo continued her 20-plus point streak to 17 in a row as she poured in a game-high of 23 points against Medgar Evers, placing her eighth in the nation averaging 22.5 points per game. Pasaturo becomes comfortable in three- point range leading the nation with 85 three-point baskets made. Samantha Flecker notched a 16-point game, sitting second on the team with 15.4 points per game. Victoria Crea is coming off a 10 point and 7 steal game, as she averages a comfortable 10.1 points per game.
Players To Watch (HC):  Jade Aponte leads the Hawks with 14.7 points per game. Theresa Leung is second on the team with 9.9 points per game. Ashley Arias is a dominant presence under the boards averaging 9.3 rebounds per game.
News & Notes: The Dolphins have been dominant over the Hawks, winning six straight in the last seven meetings where the Hawks defeated the Dolphins in 2014, 65-74. Pasaturo and Flecker both notched a 21-point outing in the last CUNYAC match-up between the Hawks. Crea finished second with 17 points. Staten Island is ranked 17th in the nation forcing 24.6 turnovers per game. Their nationally ranked defense will shine through as they look to extend their 10-game win streak.