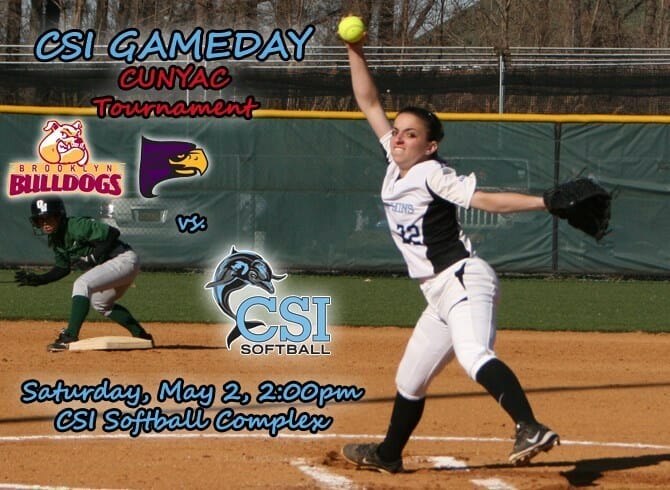 The College of Staten Island women’s softball squad will learn who their opponents are just minutes beforehand, but the Dolphins will be playing for the 2015 Pepsi/CUNYAC Softball Championship at the CSI Softball Complex this afternoon at 2pm.  Coming out of the winner’s bracket, CSI gained the Final with two resounding wins yesterday and will face either Hunter College or Brooklyn College for the right to advance to the NCAA Division III National Championship Tournament.

Hunter squares off against Brooklyn at 12 Noon today.  The winner of that game will advance to face CSI.  Both went 1-1 yesterday.  No matter who CSI faces, will Dolphins can hoist the CUNYAC trophy with just a single win, however, it will take two wins by either the Hawks or the Bulldogs to beat CSI today, as this is a double-elimination tournament, and CSI is yet to lose.

CSI is the back-to-back CUNYAC Champions and are looking for their 17th title today overall.  So far this season, they’ve defeated Brooklyn College three times, twice during the regular season, and once yesterday, 6-0.  CSI split the season series with Hunter at one game apiece.  Hunter defeated CSI, 7-5, and CSI then returned the favor, 7-1.  Yesterday, Brooklyn defeated Hunter, 10-0, and then lost to CSI, putting them into the 12 Noon game.  Hunter was defeated by Brooklyn, and then turned around and beat John Jay College, eliminating the Bloodhounds in the process.

History can be made today as well.  CSI senior Brittany Smith tied the all-time CSI record for career hits with 190 with two hits yesterday, and can take over sole possession of that record with a single hit today.  By virtue of their two wins yesterday, CSI also set a program record for wins in a season with 29, and are now 29-10 overall.  Obviously, with a win today the Dolphins will hit the 30-win mark for the first time in program history.

Admission to the championship festivities at CSI is FREE of charge all day.  Those who cannot make the game can follow live statistics HERE, or can watch LIVE streaming video through CSI SportsNet, available HERE.