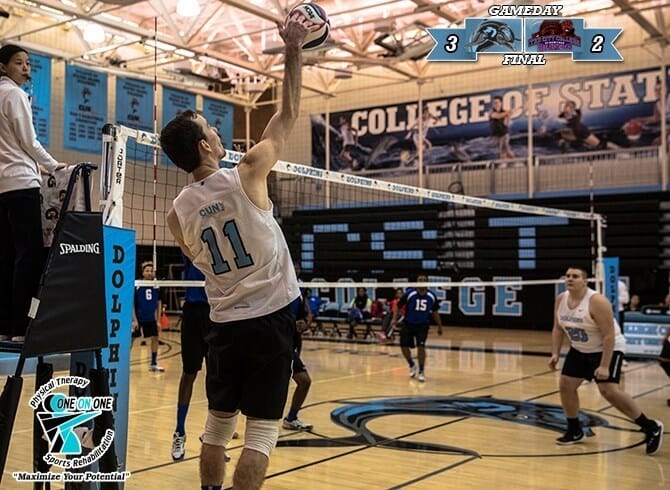 The Dolphins picked up their third straight win tonight after a grueling come from behind victory.  Staten Island was swept by the Beavers in the first match of the season but have improved since their last meeting and it showed tonight.

Justin Edwardsen collected 21 kills tonight against the Beavers which set a new school record for kills in a game which was currently held at 16.

The Dolphins fell behind early in the first set and were never able to make up their ground and would eventually fall 16-25 to give the Beavers a 1-0 lead.  Set two the Dolphins woke up and started to find their groove and were ahead of the Beavers for a majority of the match. When Song Shin Low was behind the line the Dolphins opened up their lead to 17-13.  The Beavers would come storming back after the Dolphins stalled at 22.  CCNY would take the second set and go up 2-0 after the Dolphins beat themselves as they committed three attacking errors in the final moments of the set.

Staten Island has been in this position before, staring defeat in the eyes and refusing to give up.  After a set where their offense stalled at the end the Dolphins made sure to finish what they started this time as Edwardsen and Low tallied the final two kills of the set after the score was knotted at 23.

These two CUNYAC rivals were evenly matched and were never able to garner a larger lead against their opponents and after the Dolphins took the third set the Beavers began to look deflated as the Dolphins started to gain momentum.  With Steven Caruso serving he forced three straight attacking errors by the Beavers before sending one into the net to relinquish the Dolphins’ possession.  Kevin Rosero gave the Dolphins a  21-16 lead when he slammed one into the court when Brandon Lei set one up perfectly at the top of the net. The men would once again take a set to tie the match up at two.

The Dolphins were full of confidence heading into the fifth and final set after taking two straight and although they fell behind midway through they were able to make up the deficit and take a 13-9 lead.  Staten Island would have a shock as Edwardsen, who was having a career night, went down with an injury and was forced out of the game.  Caruso was then subbed into the game and got above the net and recorded a huge block to put the Dolphins within match point. Rosero saw an opportunity and took it when Lei once again set him up for victory.  Rosero crushed the ball over the Beavers’ tired defenders for the final point of the match. The Dolphins would go on to win the final set 15-10.

The Dolphins return to action on Thursday, March 24 where they will take on Pratt at the CSI Sports & Recreation Center in Staten Island, NY at 7:00 pm.